TWOC. You gotta love it 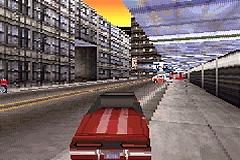 All Images (5) »
Pocketeers - the firm formerly known as AGB - have released some scintillating details on their latest portable offering TWOC, a Grand Theft Auto 3 look alike for Game Boy Advance.

TWOC, or Taken Without Owners Consent, is a pleasant police term for theft, a little like, hmmm, Grand Theft.

Anyhow, we have followed the evolution of this game for over a year and, as you may remember, it started life as a tech-demo of some cars driving around a city. Pocketeers are referring to it as a "crime-game", which we believe is mission based with a heavy slant on driving...

The screens testify to just how advanced Pocketeers have become with forcing 3D gamery out of Nintendo's GBA, a machine Nintendo itself stated was 2D only.

Pocketeers also have a football game, a racing game and several FPS titles for GBA in development at the moment. We'll keep you updated as they emerge into the real world.

By the way, it's worth mentioning that the screens are actual grabs form TWOC running on a GBA. Really impressive stuff.