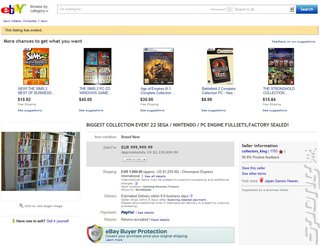 Next time some near and dear one accuses you of being obsessive compulsive and a bit weird for keeping sealed, boxed copies of every video game you buy just say this phrase: "Approximately US $1,229,899.99" because that is how much someone on eBay just made for selling their collection.

It was a pretty special collection though, it must be said, comprising as it does the following head-smashing selection of titles:

Basically, it was 22 full, sealed sets of games. All the more astonishing as they were:

1) All games ever released on Nintendo home systems, from Famicom to Gamecube!

2) All games ever released on Sega systems!

3) All games ever released on NEC systems, ALL FACTORY SEALED!